Jane Fallon is another of my favourite authors that I found thanks to buying one book very cheap at a car boot sale, and then went on to buy the back catalogue because I enjoyed it so much. I decided that Jane Fallon also deserved to have an author spotlight along with some of my other favourite writers.

I like to read Jane Fallon books when I want to read something a bit more gripping than the fluffy chick lit I often prefer. Her stories are full of scandal and always have super bitches and revenge. They are the sort of books you just can’t put down.

Here you will find her bibliography and my review of her latest release Queen Bee along with a few others from years gone by. I hope you enjoy them as much as I did.

Queen Bee is the latest release from Jane Fallon.

In this story, we see Laura move into a rented room in The Close after splitting up with her husband. It is only temporary until she finds a new home for her and her daughter to move into.

The Close is an exclusive road that homes the ultra-rich, whilst Laura is a working-class owner of her own cleaning business, Needless to say, she is not as welcome as she should be, that is until she discovers a secret about a couple of the residents.

I will say no more but Fallon does what she does best – writes a gripping story about villains and women scorned. An absolutely fabulous page turner. Highly recommended.

Tell Me a Secret is about Holly, a 40 something scriptwriter for a UK soap opera. When Holly gets promoted, strange things start to happen in the small office and her relationships with her co-workers start to change. As she starts to figure out who is trying to set her up, she realises that many things are not what they seem.

The tension builds at a slow pace while the back story becomes clear, but as the story develops  I will admit that I began to suspect everyone of trying to set Holly up so that she would lose her job. You start to wonder if it’s just one person or all of them plotting together.

This book is full of great characters who have traits that might make you smile and others that produce jaw-droppingly OMG moments!

I’m sure we’ve all had friends that we’ve told things to at the height of a best friendship only to wish we hadn’t later on.

My Sweet Revenge is set around a soap style tv drama where actors Robert and Saskia are having an affair. Robert’s wife, Paula discovers their affair when she sees part of a text.

Part 1 is told by Paula who befriends the mistress and starts plotting her revenge without letting either party know that she knows about their affair. She starts by trying to make her husband fall in love with her again so that he feels the pain when she walks out, but then things take on a twist.

Part 2 is narated by Saskia and Paula each telling their sides of the story. Of course, I don’t want to tell you anymore for fear of spoiling it for you if you decide to read it.

Whilst I don’t condone any vindictive behaviour  in real life, even in the name of revenge,  it’s more than acceptable in a novel and I just love Jane Fallon storylines. It’s fascinating to read the depths that some people will stoop to.

Incidentally, Jane Fallon knows about tv sets from first hand experience as she has been a scriptwriter and producer. 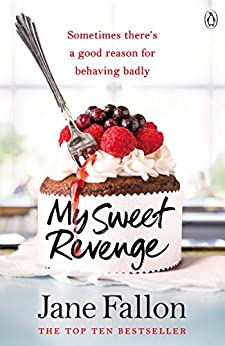 Got You Back is a rollercoaster of emotions.

On finding out the deception of their relationship with James, the wife and the mistress plot revenge on him to initially humorous attempts. But then the story takes a darker turn drawing in others and altering their personalities to the extent that it becomes rather sad.

An excellent read where you really don’t know quite what’s going to happen next. This was my first read from Jane Fallon and it certainly made me an instant fan.

You can find out more about Jane Fallon on her website and social media.

Have you read any books by Jane Fallon?

Which ones have been your favourites?

I will come back to add more reviews to this post with each new release, and I may well reread some of the old ones too.

JOIN ME ON BOOKSTAGRAM